The Triskele symbol, also known as the Triple Spiral or the Spiral of Life is represented by three equal, interconnected spirals that radiate from a common center, turn in the same direction and create one continuous line. It is an ancient symbol of pre-Celtic and Celtic beliefs, and it is still featured today in Celtic and Irish-themed themed jewelry, such as pendants, earrings and charms. Although it is widely associated with the Celtic tradition, versions of this ancient symbol have been found in a number of cultures around the world, including Greece, pre-Columbian Central America and the Hopi people of the southwest United States. The early examples of Triskele have been found on ancient carvings in numerous Irish sites from the Bronze Age, most notably on the entrance stone and the curbstones of the Newgrange passage tomb dating back to 2500 BC. Newgrange is best known for the dramatic illumination of its chamber by the rising Winter Solstice sun. The Celts believed that all important things came in threes (for example: life-birth-rebirth, mind-body-spirit, past-present-future, earth-water-air, etc.), and the Triskele is believed to represent these tri-fold meanings. It also came to be associated with the pre-Christian and neo-pagan concept of the Triple Goddess (Maiden, Mother, Crone), which is also represented as a moon in three phases. The Triple Spiral symbol carried over to Christianity, and has been found in illuminated manuscripts created by monks transcribing early Christian texts. It took on new meaning as a representation of the Holy Trinity and is still popular today as a decorative symbol of faith for Christians of Celtic descent. The meaning of the Triple Spiral is varied, complex and not yet fully understood, and it continues to fascinate researchers. Some of the more recent interpretations of the symbol include the cycles of life and even the ninth month long period of the human pregnancy. Because the Triskele can be drawn using one continuous line, and the three arms are positioned so that they appear to be moving, the image has come to represent the unending and continuous flow of life, movement and energy.
We’re quite happy to provide some beautiful examples of the triskele in our jewelry collection as you can see below: 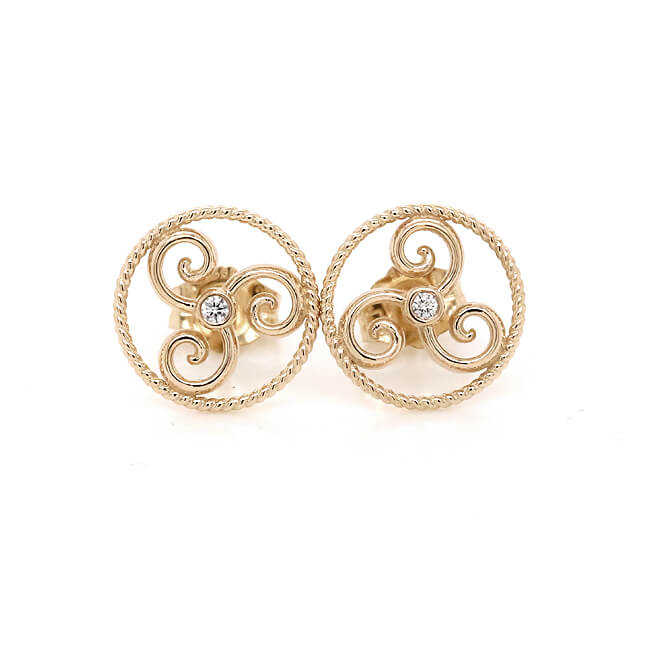 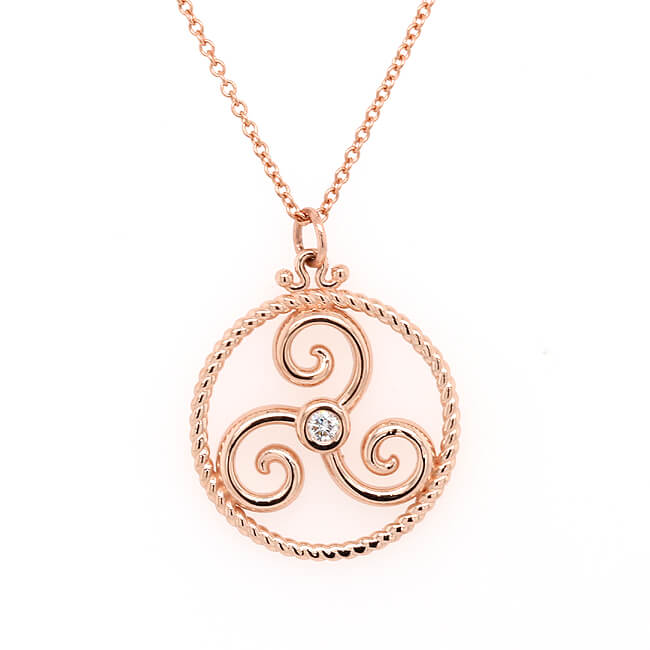